Overall, at foot slope of the field, nitrogen with sulfur increase the yields by 0.26 bu/ac, however it was not statistically significant (Table 1). Rep, 1 had an increase in yield by 8.27 bu/ac compared to due to combined effect of Nitrogen and sulfur fertilizer, whereas Rep 2, 3 and 4 had reduced yield. Additional trials with more replications should be completed to identify efficacy of treatment over multiple years. 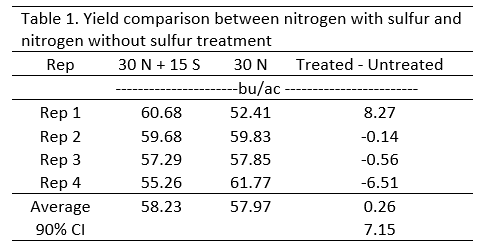